Two significant developments in Leicester are set to increase visitors, potential investors, new businesses and jobs to the area: 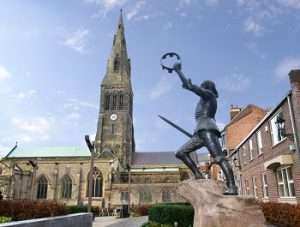 A £3.7 million revamp of some of Leicester’s most historic streets is due to commence in the New Year.

This will also provide links to some of the most attractive areas in the City – St Martin’s, The Lanes, Leicester Market and will improve accessibility through to the historical treasures of the Cathedral Quarter – Richard III Visitor Centre, the Guildhall and the Cathedral.

Leicester’s Mayor, Sir Peter Soulsby said “Investing in the city’s heritage and realising the huge potential of areas such as the Old Town is essential to support Leicester’s growth and economic prosperity”.

The intention is to continue to create a more attractive environment for pedestrians, visitors and potential investors. The past year has already seen a wide range of new businesses opened around the Old Town.

At an estimated cost of £18 million, of which £10 million is being allocated from the Heritage Lottery Fund, Main Line Museum is set to start research on the development at its Leicester North Station, Birstall.

The exciting new museum, made possible thanks to National Lottery players, is a partnership between the award winning Great Central Railway (GCR), Leicester City Council and the York based National Railway Museum (NRM) http://www.nrm.org.uk/ . It will house significant locomotives from the national collection, bringing them closer to the heart of the country than ever before. The building will sit alongside the Leicester North terminus of the Great Central Railway, with heritage trains arriving alongside the exhibitions.

The many exhibits will tell the story of how the GCR and other railways contributed to the social and economic history of Leicester and the County. A fundamental requirement of the new museum is that people will be able to see the trains operating while being in the galleries.

It is hoped that the building will commence in 2018 with a completion and opening date of 2021.

The plan is part of a wider project to reconnect two stretches of line between Leicester and Nottingham to create an unbroken 18 mile (23km) heritage route.